Recently, a very generous donation was made by Rodney Anderson’s daughter. Included in the donation of pictures and documents was a set of letters written during wartime from Rodney and Vern Anderson. The first batch of letters, beginning in 1944, were written by Rod Anderson to his mother, grandfather, and brother. The second batch of letters are written by Vern “Babe” Anderson, Rod’s younger brother, and were mostly written post-WWII. We are only beginning the process of cataloging these letters into our collection and hope to have more posts regarding their content. For now, here is a brief biography into these two brothers’ service to their country. 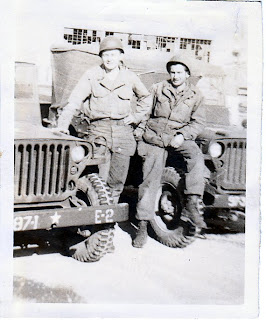 Rod Anderson (pictured at right) entered the Army in August 1943, 5 months after he turned 18. He only completed 3 years of high school. He started out in the infantry but ended up taking tests to enter into the Air Corps. He made it in and began his training and education. Soon after the Battle of the Bulge the United States began pulling men from different areas to go back into infantry. Rod was removed from his Air Corps training and was sent overseas. He spent time in Austria, Czechoslovakia, and Germany before the war ended. He was then sent back to the United States and then to Japan after their surrender. He returned home in March – just as his brother Vern was entering the Navy. 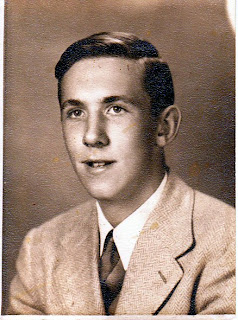 Vern Anderson (pictured at left) was drafted in March 1946 for WWII only 3 months after his 18 birthday. He was drafted again in March 1951 – almost exactly 5 years later – for the Korean war. Here are some excerpts of his oral history in 2008 detailing his time spent in service.

VERN ANDERSON: Well, I … originally, I got drafted in 1946, in March. I ended up in the Navy. I went to boot camp in San Diego, and then they sent me back to Great Lakes Naval Training Center in Waukegan [Illinois].

I spent all summer there going to a service school, which was just right down my alley because it was all about boilers. And hell, I’d been running boilers, you know. [chuckles] I knew all about that stuff.

Then I got discharged because they didn’t want us anymore. I’d only been in there eight months. So I came home. Then in March of 1951, I got drafted again, about five years after. In the same month. Practically the same week. And this time, I ended up in the Army.

I was over at Fort Lewis; and a bunch of the guys in Issaquah had been in the reserves, and they were running a reception center. And one of these guys said, “Hey, where do you want to go?”

We went through training there, and there was a port company – unloading ships – and they needed a bunch of guys up in Whittier, Alaska, which is an Army port. So they sent us up there. And because I had been in the service before, they could send me alone. Because you had to have six months in the Army before they could ship you overseas. I’d already had that before.

So we went up there, and we stayed there till right up until the first of December, then we got back here. Then they gave us a month off, you know, a month off here anyway.

When we got back right after New Year’s, they called six of us guys’ names out and they said, “You’re going down to the port of embarkation.”

We didn’t know what the hell we were going to do. We went down there to [unknown] and they made military policemen out of us. It was supposed to have been temporary. And it was such a good deal. Hell, I just fell right into that job. [chuckles] So actually, I spent the rest of my time right there.

MARIA MCLEOD: What was your job?

VERN ANDERSON: I was a military policeman on the main gate. That’s where all the troops went and left Seattle, and then also when they came back.

MARIA MCLEOD: So when you say it was the “best deal,” when you worked the gate, what did you mean?

VERN ANDERSON: Well, I had an off-duty pass. All I had to do was show up for work down there. I could do what I wanted after. Then, later on, I even got a pass for living at home. They paid you. Then I had to pay for my meals was the only difference.

MARIA MCLEOD: Do you remember how much you got paid doing that job?

VERN ANDERSON: You want to see the actual figures? I’ll show you. Didn’t get a hell of a lot.

VERN ANDERSON: Then a little later on, I got to be a corporal. That upped it a little bit, not a whole lot.

MARIA MCLEOD: So does your job change at all when your status changed? Private first class, corporal …

VERN ANDERSON: No, I did the same thing. Actually, there was supposed to be sergeants on that job but they had put a freeze on – they couldn’t promote anybody for, I don’t know, about a year there or something, or six months.

We were only supposed to be in the Army for twenty-one months. That’s what the deal was. Then they upped it to twenty-four months.

MARIA MCLEOD: So when you worked the gate, did you have weapons on you?

VERN ANDERSON: Oh, yeah. A .45 pistol. I had that Sam Brown belt and all that. Then, when they had the ships come in, you had to put on a fancy outfit – a white kind of a deal, a neckerchief-type deal. Then you had a white rope on one arm. Then you had white leggings. Then you had the hat – they used the helmet liner, actually, was what they were. They were painted fancy. I think it was a white and gold kind of a deal like that.

MARIA MCLEOD: When you were at that gate, what were you supposed to be watching for, or protecting against?

VERN ANDERSON: Well, we had to let the people go in the cars. That was one job we had. We used to take turns going to do back and forth. Then we to check everybody who came in and out.

MARIA MCLEOD: Did you have to keep a roster of their names?

VERN ANDERSON: No. They always had to have an I.D., or we wouldn’t let them in. They weren’t supposed to be bringing alcohol in, and all that kind of stuff, you know.

MARIA MCLEOD: Did you have to search for alcohol ever, or confiscate alcohol?

VERN ANDERSON: Oh, yeah. We’d take it off of them. They weren’t supposed to take cigarettes neither, you know, from the ship’s store. Golly, they were 20 cents a pack, or a carton, I don’t remember what it was. We used to take it away from them.

I remember that one day, it was on a Sunday, and this black fellow came walking along there. He had a whole carton stuck in his back pocket.

I seen it, you know, and I reached out like that, I hit him in the back. I said, “What the devil do you got in there? Come in here!”

He had steaks wrapped around his body. Tied up in there, you know. Taking them home, see.

So I had to do something then. I couldn’t let him go. So we had to call the officer of the day, and I don’t know what they did. They didn’t do nothing to him. In about two weeks, I seen him back working.

MARIA MCLEOD: Was he stealing steaks? From where?

MARIA MCLEOD: Oh, and he was going to take some home. I guess some people must have gotten mad at you for taking their alcohol and their cigarettes.

VERN ANDERSON: No, they didn’t seem to be. They knew they were wrong. What were they going to do about it? If you got a job to do, you do it.

From the Digital Collections: Happy Halloween!

Recipe of the Week: Mother's Doughnuts

Looking for Local History: A Voice From The Past

The Birth of the Seattle Biomedical Research Institute

A Time of Giving: Issaquah Thanksgivings in the Great Depression

This NOT Just In: Great Seattle Fire
Scroll to top