I’ve been at this job for nearly 12 years now, and there are few places I go in Issaquah that I’m not aware of the past events that occurred there, the people that lived there. Now that phenomena has spread to my life at home in Seattle. When preparing a program about his life, I discovered that Bill Evans lived in Seattle with his parents for a time, just five blocks north of my house. John Simon Umberger, minister at the Issaquah Community Church from 1936 to 1943, retired to a small home a few blocks west of me.


People are rarely only of one place. Like coal seams, they can travel from place to place. I’m fascinated with where people came from to settle in Issaquah, and where they went when they left. Because of this, I end up learning about the history of number of other places and time periods in the process of doing local history.


All of this verbiage is meant to introduce one little historical tidbit that I recently discovered linked back to Issaquah.

In 1879, Willis Hiram Corson was born to Hiram and Eve Payne Corson in Sharon, Maine. As a child, he moved with his parents to Washington State. Hiram Corson was born in Maine in 1844. He and his wife, Eve St. Clair Corson, moved to Washington State in the 1880s. They lived in Seattle until the mid-1890s, when they relocated to Issaquah. Hiram Corson was appointed the official mine physician; he later went on to serve as Mayor of the town. Although he and his wife returned to Seattle to live for a time, they returned to Issaquah in his retirement. He died there in 1944, at the venerable age of 95.


Willis H. Corson, meanwhile, followed in his father’s footsteps by training to be a physician and surgeon. After serving in the medical corps during World War I, he went on to work in private practice at Providence Hospital. He also served as King County Coroner, and his findings were relied upon in several high-profile murder cases. 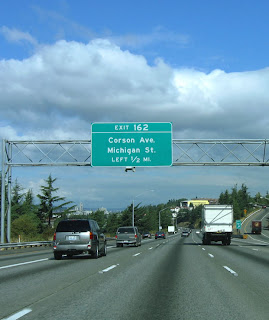 Corson also served as the supervisor of the King County Hospital in Georgetown (now part of Seattle), as early as 1907. The King County Hospital was a public facility, which meant that people without means could find treatment there. Corson retired from the hospital in 1912. Before his retirement, the street that passed by the hospital was named in his honor: Corson Avenue.


So, if you’ve ever had reason to drive south of Seattle on I-5, you’ve passed a little bit of Issaquah’s history, in the form of the Corson Avenue Exit.